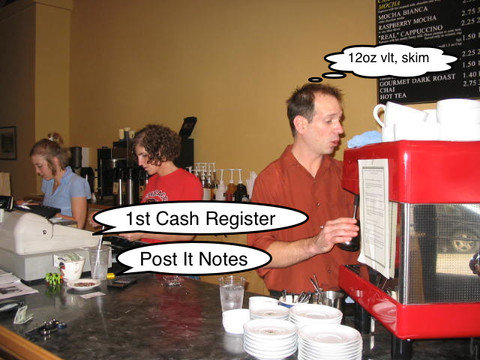 A new addition has been made to the Coffee Hound— the Revel iPad POS (Point of Sale) and for some, it is a surprise, but for others it was a long time coming. Too often, in the middle of the night, my brain has rambling thoughts— plans, ideas, memories, etc. The other night, at 3:00 am, I began to think about how the Coffee Hound has had an evolution of sorts with our register system and how each time, the change has brought on the exact same anxieties. The fear of something new and different is a powerful enemy that I fight hard to keep myself from being stifled with.

When we first opened in 2002, I had to manually program our first register. I had no idea what I was doing or even a basic concept of how any system would work for the cafe. Things like taking the customer’s order with all the details of their specific drink and then relaying this information to the barista to hand off to the customer, was not really thought through until after we opened our doors. We opened up and were so much busier than we had anticipated (in the business plan), that it forced us immediately into thinking about speed, efficiency, accuracy, and quality when developing a system. We started using post-it notes to communicate the drink orders to the barista. The cashier would write down the order and pass it to the barista. The barista lined the post-it notes up on the espresso machine and as the drink was completed, put the note on the cup and then handed it to the customer. We had special short abbreviations for all of the drinks— Vanilla Latte was VLT, Mocha Bianca was MochaB and so on. This programmable register stayed with us for the next four years before making a leap to the next system.

In 2006, we moved into the relm of POS. There was so much to fear and the biggest of all was the cost. There was a reason only mega chains at that time had sophisticated mechanical devices. Each store’s system cost $17,000 for a single terminal and we had to use creative financing to make this happen (high interest loans). I spent the next two years paying the devil back. This doesn’t account for all of the other hidden costs I did not expect. Some of these hidden costs were things like $60 for fifteen minutes of non-business hour calls, mandatory credit card compliance software updates, constant replacement of hardware breaking down and so on. After all the cons, what were the pros? We got faster! Reports gave accurate information and were valuable to analyze data and make better business decisions. Like with any computer system, after seven years, it was time to replace with updated technology.

Our first point of sale system

Now, in 2014, it’s the era of iPad systems. I actually have spent the last three years waiting for an iPad system that would replace what we had been using. In 2011, an iPad could act as a simple cash register, but not a full on POS that would collect data, create reports, process gift cards, etc. By 2012, I noticed big changes in register systems, mostly due to icloud technology. By 2013, I found the system we recently have switched to, and committed to making the switch over. The new system was affordable, without resorting to crazy financing. It’s sleek, allows me to work from home while watching TV and playing video games, and makes advances in customer service— but that’s a whole other blog….

Happy Holidays from the Hound!

Happy Holidays from the Hound!